Stephen Granger has written in to ask everyone to join him in congratulating Stephen Malpus and his wife Margaret on their 40th Wedding Anniversary this month! A lovely evening in Stockport (21 July) was enjoyed by family, friends and old School colleagues. Well done to Stephen M. and Margaret. Onto the 50th now! Stephen G. hopes to see you all in October for another reunion.

There was a very large turn out for the funeral of Margaret Fletcher (nee Mann) at Blacon Crematorium, Chester on Thursday 25 January 2018, including several young and old pupils from Birkdale School.

At the end of the service, the Chester Deesign Choir signed Margaret’s favourite song “You Raised Me Up”.

It was family flowers only but donations of £901.36 were raised, and this was split between The British Lung Foundation and Chester Deaf Club.

The wake was held at Chester Deaf Club afterwards.

A mini reunion took place in Manchester yesterday (11 August). Five ex-pupils met up for a chat over a pint and a meal. This was enjoyed by all. In attendance were Chris Yates, Steven Grainger, Steve Malpus, Mike Fahey and Stephen Smith.

Lads’ night out in Manchester – they never stopped talking!
[Thanks to Mike Fahey for the news and photo]


Emma Hughes has posted a message in our Guestbook to say she’s moving to Yorkshire in September to start a new job at John Lewis in October.

Good luck Emma with the move and the new job!

The 1973 Horizon documentary ‘The Curtain of Silence’, which featured some pupils and staff from our school, is now available to view in full, with subtitles, on BBC iPlayer here.

News sent in today reveals our school is to feature on See Hear tomorrow (7 May) at 10.30am on BBC2. If you miss it, programme is repeated on Thursday at 12.25am on same channel. See Hear looks at a Horizon episode made 40 years ago which explored teaching methods at the time.

The BBC is looking for ex-pupils/staff who were at the school in 1973. If you’re one of those or know someone, please contact one of the following:

Wedding news: congratulations to Clare Sparks who will be getting married in September 2014.

BBQ news: those who went to Ainsdale beach today were faced with very strong winds. So strong that it wasn’t possible to put up gazebos properly. A few tried, including Mike Fahey who said he struggled and gave up in the end! A ‘Plan B’ was called for; Sue Tinsley offered to let everyone meet at her house to continue the BBQ Reunion. A very big thanks go to Sue for saving the day. Stephen Granger has already commented on the day in the Guestbook.

Former pupil Michael Hoggart has been in touch to say he is now an actor with the Wirral Autistic Society Make Waves drama group. He says he’s enjoying himself. Michael says he was a care worker and a teacher in a couple of plays, and they’re now working on a play about aliens.

Michael says he can be seen in a YouTube video of one of his performances – watch here. 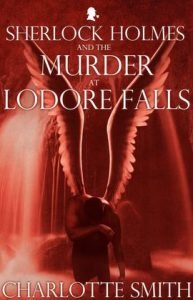 Charlotte Smith has recently been interviewed by deaf journalist Charlie Swinbourne about her book Sherlock Holmes and The Murder at Lodore Falls. Charlotte mentioned our school in the interview. Further book information can be found at the following pages:

Charlotte will be signing copies of her new book at Waterstones in Southport on 6 October from 1.30pm.