News has been received this evening that Mrs Eileen Tomkinson sadly passed away last week.

Mrs Tomkinson started teaching at our school in 1964, and went on to become Head of the Junior School in 1980. When Miss Clark retired in 1986, Mrs Tomkinson took over as Principal. At the end of the Christmas term in 1991, Mrs Tomkinson herself retired from this role.

No funeral details are available yet, but it will be after Christmas.

Our thoughts are with Mrs Tomkinson’s daughter Helen, family and friends during this sad time.

Update 03.01.2022: a date has been set for Mrs Tomkinson’s funeral; it will take place on 14 January at 2.45pm. There is a 30 person limit on funerals in Wales at the moment, but there will be a virtual link available should anyone want it. Please use the Contact Form to request the link if you would like to have this.

Update 10.01.2022: as many of you who knew Mrs Tomkinson will not be able to get to join the family for the funeral service on Friday, they are hoping to be able to collect memories that can be read or spoken during the service. If you would like to share your favourite memories of Mrs Tomkinson, please contact us to arrange sending these to Helen and family.

Update 13.01.2022: details of the webcast for Mrs Tomkinson’s funeral are now available. If anyone wishes to access the funeral service tomorrow (14 January) at 2.45pm, please contact us to request the login information.

We are sad to report the death of Mr John Morgan who passed away suddenly in May.

Mr Morgan was a well-respected member of staff who thought a lot about school and its pupils. He taught Science, and was involved in the Duke of Edinburgh Award scheme. He will be greatly missed.

Former Chairman of the Governors Mr Denis Hobley died suddenly this morning. No further news are available at the moment.

Mr Hobley was a kind, caring and wise friend of the school who served as a dedicated Chairman on the Board of Governors. He continued with the Birkdale Trust for Hearing Impaired after the school closed. 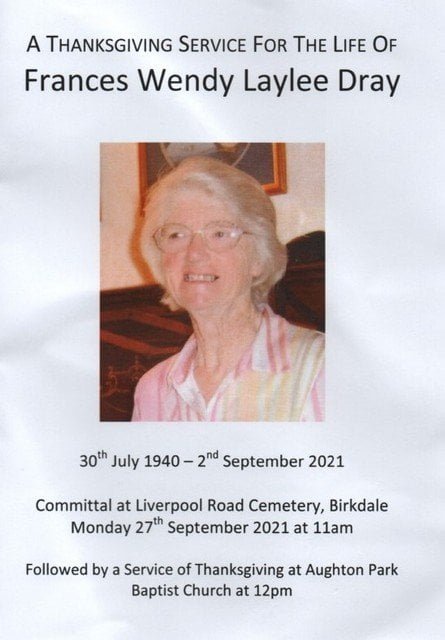 Wendy Dray’s funeral took place yesterday (27 September). Mourners gathered at Liverpool Road Cemetery for the Committal, and this was followed by a Memorial Service at Aughton Park Baptist Church.

Victoria Sefton‘s parents were also there.

Mrs Rothwell was asked by Miss Beryl Daintith to present a tribute about Wendy in her years as a teacher at Birkdale School.

Qlocal reports on the service here.

Mrs Rothwell has been in touch to let us know the sad news that Miss Wendy Dray passed away yesterday following a long illness.

Update 11.09.2021: arrangements for Wendy Dray’s funeral have been announced. It will take place on Monday 27 September. First, a burial at Liverpool Road Cemetery, Southport [PR8 3BN] at 11am, followed by a Memorial Service at Aughton Park Baptist Church, Long Lane, Aughton, Ormskirk [L39 5BZ] at 12pm.

You are welcome to attend either or both of these. If attending the cemetery, if you arrive a few minutes early at the gate you will be able to follow the hearse to the burial plot for the graveside prayers.

Beryl Daintith has asked for no flowers but donations you wish to make will be split between Queenscourt Hospice in Southport and Wycliffe Bible Translators. There will be collection boxes at the church. Details of where people can send donations if they are not able to attend the funeral will be made available soon.

The Champion has reported that Mrs Furness recently celebrated her 104th birthday.

Mrs Furness marked the occasion on 19 June with her daughter Rosalind and two of her grandchildren, Sarah and Anne. It was the first time that more than one named person has been able to visit her since before the coronavirus pandemic began.

We all wish Mrs Furness a very Happy Birthday!

Led by Elizabeth Rothwell, there were a number of speeches and a slideshow which included photos of Morag in her younger years and several taken during her time at Birkdale School.

Robin recounted some of Morag’s early years with the family. Two ex-pupils, Victoria Haynes (nee Sefton) and David Walker, gave their own tributes to Miss Clark. Victoria’s father, Chris Sefton, talked about meeting Miss Clark for the first time and how reassuring she had been about his daughter attending the school.

Elizabeth gave an overview of Morag’s work at Birkdale School and around the world. So many things were learnt from this, including the moment Morag met Nelson Mandela in South Africa. Extracts from the numerous messages received from professionals in different countries were read out.

Thanks were given to the minister of the Baptist Church for allowing his church to be used for the service. Tea and coffee was served afterwards, which gave people a chance to catch-up and chat. It was nice to see among the ex-staff Mrs Janet Mulcahy (nee Morris) and her mother Mrs Morris, Mrs Margaret Dutton (nee Crowley), Miss Angela Baron, and Miss Baldwin.

Particular thanks must go to Elizabeth Rothwell for organising this lovely Memorial Service.

A condensed form of the speeches with some photos will be put online in due course for everyone to see.

Following the sad news of Miss Clark’s death in April, a Memorial Service for her has now been arranged for Sunday 21 July at Scarisbrick New Road Baptist Church in Southport at 2.30pm. (Postcode for Satnav users: PR8 6PU)

Please indicate here or by using our Contact Form if you are able to attend so that we have an idea of numbers.

A couple of staff news: some of you may remember Mrs Goodall, who was a teacher in the Junior School and organised the Brownies. When she retired she became caretaker at Glamis Castle in Scotland. Now Mrs Goodall is in a nursing home after suffering a bad stroke.

Also Mr Fyles has been in hospital for a while but is hoping to be discharged soon.

For those who were not able to attend Jack Henderson‘s funeral, and for those who were there but couldn’t follow everything said during the minister’s speech, the eulogy presented by Rev. Peter O Hughes is now available online to read. To see it, please go here.