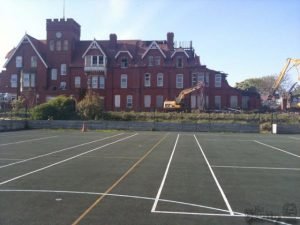 17 MAY 2010: A major fire broke out overnight at our school and at least 50 firefighters using 8 appliances have been tackling the blaze. Some residents were evacuated around 2.30am. No-one was inside the building when the fire started. No cause is known yet, but arson is suspected.

More on this story at BBC News.

UPDATE 1: Someone at the school site has informed us that a bulldozer is there so it looks like part of the building will be knocked down. More news as & when we get it.

UPDATE 2: Bulldozer been in action most of afternoon knocking down right hand side of school where changing rooms, Home Economics room & Schierwater Room was. Council official said this will continue until structure is completely safe. Firemen still at scene dampening down dust, which is very hot & contains some asbestos.

UPDATE 4: Many ex-pupils & ex-staff, including Mr Birkby & Mr Henderson, have visited the site during the day. Quite a few photos were taken, and everyone shares the same feelings that this is a sad day for Birkdale.

18 MAY: An investigation is underway as to the cause of the fire. Merseyside Police are appealing for witnesses to the blaze: anyone with information should ring them on 0151 777 3165.

2 JUNE: Sefton Council to issue third & final Urgent Works Notice on the owners to carry out much needed repairs on remainder of building. Failure to comply with this order will force Sefton Council to either do the repairs themselves then present the bill to the owners (estimated to be about £70,000) or seek to purchase the building outright.

Note to anyone visiting the school site: asbestos warning signs are now on display.

6 JULY: Former pupil David Jones spearheads campaign to restore school building for use by the deaf. Discussions are taking place with Centremodel Ltd., and presentations are being prepared. To follow the updates on this, check out the newly created Facebook Group.