The following eulogy was presented by Rev. Peter O Hughes during the funeral service for Jack Henderson at Lord Street West Church on Friday 13 March 2015. 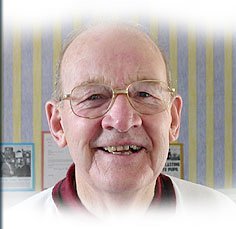 Jack’s family would like to thank everyone for coming to celebrate his full and active life. An invitation is extended to all to join the family at the Masonic Hall for refreshments following this service.

Jack was born in Southport on 10 May 1924. He spent most of his childhood in India where his father worked for the Railway Company. Jack attended boarding school in Calcutta where due to his Urdu not being as good as it should have been, he received the cane on a few occasions.

Jack returned to Southport just prior to the start of World War 2, to live with his Grandmother. He tried to join the Royal Air Force but as he was underage his Grandmother would not sign the consent forms. Jack joined the Merchant Navy instead, they were obviously not as concerned about age! This was the start of Jack’s life long love affair with the sea, and anything that sailed upon it. He enjoyed many trips on the Manchester Ship Canal; days spent in Crosby and on Liverpool Docks fed this affair as well as the cruise line journeys to and from Africa. Jack was very popular in the Merchant Navy because he didn’t drink or smoke and would give his rations to others who did.

Jack met Joan through Southport Tennis Club, where her father played. As Jack was living in digs, Joan’s father offered him the chance to come and live with his family. This offer was too good to turn down and Jack turned up on their doorstep with suitcase in hand. Joan at the time was engaged to someone else but after getting over the urge to constantly fight with Jack agreed to marry him and break off her engagement. They were married here at Lord Street West in 1945, a marriage that lasted for 63 years. The happy couple managed to set up her ex-fiancé with one of the bridesmaids at the wedding. They too married and had a happy life together!

Jack decided at the end of the war that being in the Navy was not conducive to married life so used his demob money to train as a teacher.

Christine was born in Southport the same date that Jack and Joan were married. Typically Jack would often forget to mention the three years in between in order to make a joke of it. For many years this day was one of joint celebration.

Teaching was a real passion for Jack. As an academic and sports teacher, he instilled both enjoyment and motivation to every pupil. Jack truly believed that teaching was a vocation, giving him the privileged opportunity to impart his knowledge and enthusiasm for sport to young people. Jack taught for a period in Africa, firstly at Bulawayo Technical College where Michael was born. Later he taught at Copper Belt Mining Industries in Kitwe where Janet was born.

Returning to the UK, Jack taught at Burwood Park School for the Deaf in Walton-on-Thames and later at Leamington Spa as a peripatetic teacher of the deaf. Jack’s real and abiding love was for the place where he spent most of his working life, Southport School for Hearing Impaired Children on Lancaster Road in Southport.

The children that passed through the school were Jack’s second family. There were no limits that he would not go too to ensure that they had every advantage that he could give them. He would take them to as many sporting competitions as possible, encouraging them to participate in the Duke of Edinburgh Award scheme, camping in the Lake District. Jack was someone who was there for all who were associated with the school. The love and affection that the children held for Jack is evident by the fact that he was chosen by the recipients of Gold Duke of Edinburgh Awards to accompany them to Buckingham Palace for their awards ceremonies on three occasions. That love and affection is also seen in the volume of tributes on social media that have been posted and the presence of many ex pupils here today.

Sport was also a vital part of Jack’s life; there were not many sports he did not play at some level. He was involved in hockey and cricket at Southport & Birkdale, coaching as well as playing for many years. He loved badminton, playing and organising the league for many years. Jack was involved in squash till Joan made him stop playing. He was still playing badminton well in to his 80’s. His favourite saying to partners in badminton was “Just serve then stay out of the way!” Opponents in later years would often underestimate him, seeing this old man in a long jumper covering his very short shorts, hobbling onto the court they would take pity on him. This was a huge mistake, as he would then spring into life and casually have them running from side to side and then tip a drop shot just over the net out of their reach.

Jack was well known in Southport for being the man in the shorts. Joan would ban them in the winter months but once he was on his own, the shorts were on in wind, rain and sun 365 days a year, except Sunday mornings for church.

Once Jack retired he took to volunteering, joined the WRVS and served as treasurer and as a volunteer for more than 20 years. He was often seen around the wards doing the “trolley” or helping out in the shop. He couldn’t do enough to help others and was instantly recognisable as he always had a smile on his face.

Jack also ran trolleys at Chase Heys, and The Orchards Day centres. He was Father Christmas at Tibi Tots, and remained involved with both Southport Badminton Association, The Deaf Club, Hearing Dogs for the Deaf and the Schools Swimming Galas.

Sadly Joan died in 2008 after a short illness. Jack turned even his loss into a positive thing and took on another role as official door opener at Westcliffe Manor Nursing Home. When it became apparent that he no longer wanted to live on his own he moved into Westcliffe Manor where he spent the last 2 ½ years of his life. The staff there were adopted by him as family and he was so well looked after, always appeared happy, relaxed and right at home. The family would like to give a special thank you to the staff of Westcliffe Manor for the care and affection they always, without fail, showed to Jack.

Jack was doing well until just after Christmas when a chest infection laid him low and he stopped eating. He died peacefully on 28 February.

Jack will be sadly missed by all who knew him but no more so than by his own family. Family was the most important thing to him, he was never happier than when all his family were around. He was very proud of his three children Christine, Michael and Janet along with their partners Roger, Helen and Alistair. He was, in their own words, an awesome granddad to Andrew, John, Katie, Sam, Kim and Alexandria and a doting great-granddad to Sophie, Bethany and Wesley. Jack loved his wife, children and grandchildren and showed great affection to them, an affection he didn’t experience in his own childhood. When he became stubborn and sulky it was only ever for a while and soon he was back to his normal affectionate self.

Jack’s family will always remember that when on family holidays in Wales, every day was a beach day even when it was raining. However, the sand had to stay where it belonged and no one was allowed to go in the front door in case it came inside. Instead the family were required to sit with their feet in a bucket of water at the back door. He loved arranging cricket matches on the beach with any children who wanted to get involved, and going on crunchy walks with the dog. You only got a bite of crunchy once you had walked so far. On Jack’s walks the destination was “just around the next corner”.

Jack enjoyed cruising the Manchester Ship Canal, laughing at his own jokes – because he knew the punch line to come, his beloved Suzuki car, Morecombe and Wise, Tommy Cooper and musicals.

In Jack’s early days he attended St John’s Church, Birkdale. When he was teaching he would often go with the children to St James’ on Lulworth Road. It was through Joan that Jack joined Birkdale United Reformed Church where he served as Elder and Treasurer. He looked after the building and sorted out all the jobs and repairs that were needed. Chris, one of the Elders at Birkdale, wrote:

“Our Church was very important to him and he was much loved and respected by all of us. He had a great way of bringing humour into his Treasurer’s reports. When I took over from him, he was very helpful and encouraging, but he was an impossible act to follow at the AGM! He regularly worked in the lunch club and the diners and volunteers all used to enjoy hearing him tell a story with a punch line over coffee. He was also good at disciplining children in the church in a firm but humorous way. He started the church badminton group.”

Jack served as Treasurer of Churches Together in Birkdale and naturally he presented the accounts stood at the front in his shorts. Jack worshipped here at Lord Street West on several occasions each year, including Christmas Day, and as part of the Probus Choir. He was a great admirer of his son-in-law Roger’s organ playing.
Behind his involvement in Church was Jack’s deep faith in God. An important part of this was his belief that somehow God had been involved when he was not torpedoed travelling in the Atlantic Convoy towards the end of the war. He believed that God had spared him for a purpose. Therefore Jack lived out his faith in action, in the way we have heard described in the story of the Good Samaritan. Jack was not the sort of person to pass by on the other side when he saw a need. Instead, Jack would cross over and come to help a person who needed him. This is what Jesus called loving our neighbour as ourselves. The reading from Corinthians reminded us what remains after everything else has passed away is faith, hope and love. The greatest of these is love, because God is love. That love is why Jesus came into the world, died for us and opened the way to heaven.

Today as we commit Jack to God we trust that his life of loving service has found completion in God’s love in heaven.