School Closed But Not Forgotten
The School closed its doors to hearing-impaired children on Wednesday 23 July. It was a sad day for all those who have been associated with the 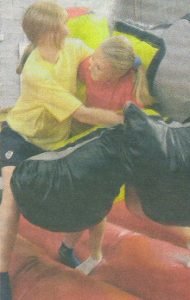 Two days earlier, the School held its very last Sports Day. Although the afternoon was threatened with rain, it turned out to be pleasant with the two remaining Houses, Bowes & Marchant, competing against each other.

On the last day of term, a special ‘It’s A Knockout’ was organised for the children, which included “bouncy castle boxing” and various other games. Fun and games were played throughout the day to try to keep everybody’s spirits up. There was also a special Assembly to mark the pupil’s achievements with prayers said for their future safety and well-being.

Staff and ex-staff gathered together at QV’s Wine Bar in Southport on 24 July to socialise before going their separate ways. Former Principals Mr Furness and Mrs Tomkinson were in attendance, and it was an enjoyable evening, which went on till quite late.

26-year-old David had taken his own life, and the funeral at 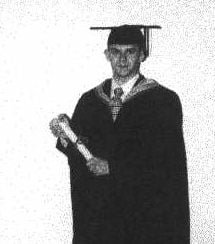 Southport Crematorium on 29 July was well attended by many of his former classmates. Paul Southall gave a moving speech reflecting on David’s life and achievements. Several staff from School were also present, including Mrs Wood and Mrs Mowat.

David had done well for himself since leaving School in 1993. He had graduated at Edge Hill University College in 2000, gaining a 2:2 BSc Honours in Business Organisation and Management.

News in Brief
Lorna Shaw wishes everyone to know she has changed her name back to Lorna Haycock.

Former member of the Care Staff, Natalie Jones, gave birth to a baby girl, Tegan Maisie, at 9.21am on Tuesday 9 September.

Congratulations to Reggie & Yvonne Cobb on the birth of twins, Jovinta Jane and Fraser Caesar, born on Monday 6 October.

Old Aerial Pic up for Grabs! 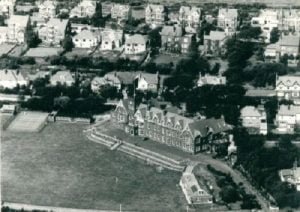 Mr Henderson has an old aerial photo of the school and says he has copies for those that left School between 1965-75. If anyone from those years is interested, please could they get in touch with him by sending a stamped addressed envelope so he can return the photo.

If anyone needs Mr Henderson’s address, please contact the Editor for it. 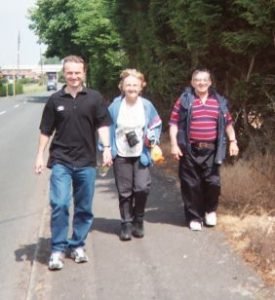 Congratulations to Maureen Howe [nee Walters] and Michael Lumby on their sponsored walk in the summer to raise money for a portable loop system.

Maureen raised £62 whilst Michael managed to get a whopping £214 – well done to you both!

School Website
The School website has now had all its content removed, and the homepage has been replaced with a press release given by the Chairman of the Governors, Mr Denis Hobley. Eventually, the School website and its address will disappear, and won’t be viewable again. 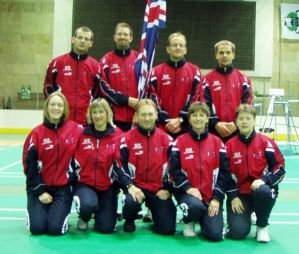 Janet Thomson [nee Hollywood], Robert Asbridge and Steven Weymouth’s wife, Kathy, all went out to Sofia in Bulgaria for the World Deaf Badminton Championships. The competition was held from 20-28 October, and all three were representing the Great Britain team.

For reports and match results, visit this website: www.bulbad.8k.com/deaf.htm.

Reunion 2004
Don’t forget the next Reunion is taking place at the Shelbourne Hotel, Southport, on Saturday, 15th May 2004.

The ticket price will be announced before Christmas, and tickets should be available by the end of January. We are already aware of over 180 people interested in attending this event, and those people will be notified when tickets are available so they can get them. If you haven’t put your name down yet, please do so soon to avoid disappointment by contacting the Editor.

The North Deaf Schools’ Swimming Gala took place at Irlam Baths on Wednesday 15 October, and this was the first time since the School closure that Birkdale didn‘t take part. As some of the Birkdale pupils went onto St. Johns at Boston Spa, the Head Teacher, Mr Wrynne, was approached to see if their School would take part. Unfortunately, they were not able to do so this year, but they will consider entering the Gala in 2004.

For the record, Doncaster School won the North Deaf Schools’ Swimming Gala this year. They also won the Boys’ and Girls’ trophies.

Harry Mook of Birkdale won the Boys’ Individual Medley last year, and this trophy has since been returned and will be refurbished before being passed onto this year’s winner. [The winner keeps the Individual Medley trophy for a year.] 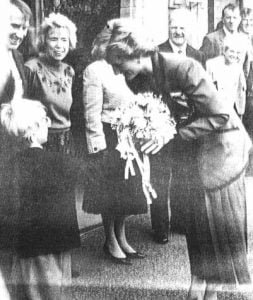 The Royals have been in the news recently, and not all of it good publicity. Whatever you may think of the Royal Family, we take this moment to remember Princess Diana’s visit to the School in 1989.

Kathy Foden presenting flowers to Princess DianaPrincess Diana arrived at the School mid-morning on Wednesday 20 September 1989, and she was presented with flowers from pupil Kathy Foden. Following this, the Principal, Mrs Eileen Tomkinson, escorted the Princess around the School.

Some former pupils came back to the School to meet the Princess as well as many parents and invited guests. After her tour, Diana signed the Visitor’s Book, and she received a video and book about the work of the School from the Chairman of the Governors, Mr Peter Cowan. 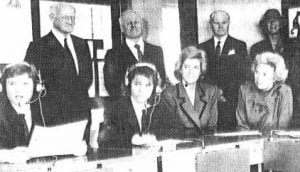 After the visit, there were fun and games in the afternoon for the children with a magic show given by Tony Wright, and there was a party in the evening. It was a day both staff and pupils will remember.

Following the Princess’ tragic death in 1997, Mrs Anne Wood represented the School at a Memorial Service for Princess Diana at Liverpool Cathedral on Sunday 7 September 1997. She took part in the ‘Procession of Memories’ when a photograph of Princess Diana’s visit to School was placed on a table in front of the altar.

Future Newsletters
This is to remind you that if you wish to continue receiving a printed copy of ‘Birkdale News’ over the next 2 years, starting from March 2004, please send £2 to the Editor as soon as possible. Cheques/PO should be made payable to ‘Birkdale Reunion Association’. [Contact the Editor for address details.]