Nicholas Wood
We are saddened to learn of the sudden death of Nicholas Wood. He passed away on Thursday 19 July. He was very well known around Southport, and you can find many tributes to Nick on the southport.gb.com site. His funeral took place at St. Johns in Ainsdale followed by a service at Southport Crematorium on Friday 27 July.

St Johns Church was packed out with all of Nick’s family and friends. There was standing room only as [at a rough count] over 600 people heard Nick’s sister talk about celebrating the life of her big brother, and his time as a gentle giant who was always there to help people in times of need.

A group of ex pupils, along with Mr. Henderson, attended to pay their last respects, and a small group of these went along to The Sands Hotel afterward to chat to Nick’s family and reminisce over their own memories of Nick.

[Thanks to Mike Fahey for additional information.]

In September she will go to college to do Sugarcraft on Monday evenings and Fashion on Fridays for a year. She will also do cooking for 10 weeks on Tuesdays. The rest of the time Marayam will work as an assistant in a hairdressing salon maybe at Queensway or Kensington in London.

Leavers’ Exam Results Strips
Some of you may remember the leavers’ exam results being put up on the wall by the fish tank. Before the school closed Mr Henderson collected those that were in good condition and cut them up into strips. At the Reunion in 2004 and since then, he has been giving them out to ex-pupils who he sees.

As there has been some enquiries about these, Mr Henderson has made a list of the ones he has left. Details of the ones he still has can be found on this page. If you’re on the list, and would like yours, please contact either Mr Henderson or Tony Wright to sort out getting hold of it.

Also congratulations to Larie Morris on the birth of her baby boy, Jeremy Britton, who was born on 7 December weighing 6lb ½oz. Larie says Jeremy was five weeks early! 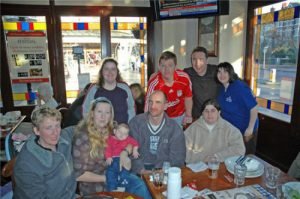 In early December, Charlotte Smith organised a mini-reunion for the Class of ’86. Angela Richmond writes:

On 1 December, we met at the Prince of Wales Hotel and had a few drinks. Then Charlotte decided to phone Mr. Henderson, and he had just arrived back home. So he turned up and chatted for a good hour, although he said he was only stopping for about 10 minutes! It was good to see him.

Later on, some of us were hungry and went to Mamma Mia to eat, and more drinks! Then we met up at Weatherspoon – for more drinks!

The next day, we met at Weatherspoon, where we later saw Cathy Green and her baby. We had lunch there. Heath Mulqueeney did turn up later on in the afternoon, but unfortunately, I didn’t get the chance to see him as I went home.

Overall, everybody seemed to have a great time!

We send our condolences to his family and friends.